​How Does In-Flight Wifi Work?


It wasn’t so long ago that all electronic devices had to be switched off during take-off and landing and telephones weren’t allowed to be used at all during flights. However, in the last few years, more and more airlines are relaxing these rules, and many have even started offering the option of in-flight Wifi.

Have you ever found yourself checking your Facebook feed or been chatting on WhatsApp as you soar above the clouds en route to a far-flung holiday destination and suddenly wondered how it’s possible to be connected all the way up there? Here, we’ll have a look at how it all works – so that next time, you’ll know.

How does it work?

In short, there are two systems running parallel that allow you to stay connected during your flight. The first system uses networks of ground-based towers sending out signals that are picked up by receivers underneath the plane’s fuselage. This essentially transforms the aircraft into a flying hotspot, allowing users to connect. Your data is then sent via the plane directly back down to the ground.

As the plane travels, it connects to the nearest tower, switching from one to the next throughout the flight. Imagine walking along a street where you have the Wifi passwords for all the cafés and bars along the way; as you walk, your phone automatically connects to each new signal as you pass. The plane is a bit like a giant airborne version of this, relaying the signal to its passengers as it passes over the towers below. 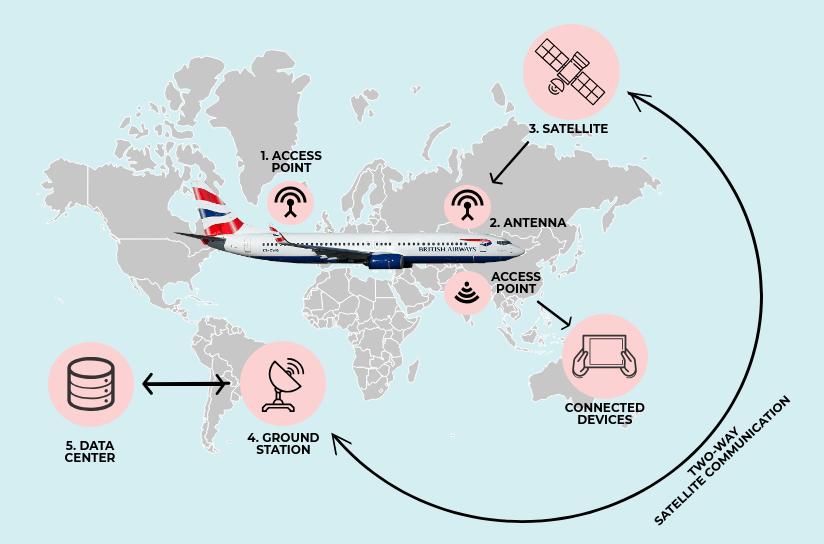 1. Wifi antennas positioned through the cabin receive signals from passengers

2. Signals are sent to servers on the plane

3. An external antenna transmits the signal to a satellite providing the coverage that relays on satellite access station on the ground

4. If within range signals can be sent directly to mobile towers on the ground with coverage in areas with greater coverage in the areas with a greater concentration of aircraft, such major hubs, and high-density routes

5. One on the ground, the information is routed through a “meet-me-point” before being directed where it needs to go.

Can you use it above the ocean?

The problem with this system is that when you are flying above large expanses of ocean or over particularly remote places on land, there are no towers to connect to and so Wifi is not possible. This is where the second system takes over.

When there are no towers within reach, the in-flight Wifi switches to a system based on satellites circling in geosynchronous orbit above – this means that as the planet spins, the satellite remains at the same fixed point above the Earth at all times.

In a way, it can be thought of as being a bit like having a network of towers in the sky. As the plane travels, it stays connected to the nearest one via antennae, this time located on top of the fuselage. With this system, data from your device cannot travel directly down to the ground but rather is sent up to the satellite which relays it back down to Earth.

Why is it so slow?

One of the first companies to offer in-flight Wifi was Gogo. Their service was first launched on Virgin America flights back in 2008, only a year after the appearance of the first iPhone. Back then, not many people had a smartphone and only a few people per flight needed to connect to the service – so in 2008, the 3Mbps download speed they offered was fine.

However, fast-forward ten years and it is a rare passenger who isn’t carrying some kind of tablet, smartphone or laptop, and our requirements are a lot more demanding now, too. When we connect to Wifi, we don’t only want to fire off a few emails, we also expect to be able to stream movies, play games or even make internet phone calls – check out this article on how to take advantage of online calling.

The problem is – as you may imagine – it’s a lot more expensive to update satellite-based systems than it is with ground-based systems, so the tech has tended to lag behind. Currently, the speeds offered for in-flight Wifi services are a lot slower than we are used to in our homes and offices, and the volume of users on a plane is also a problem.

How much does it cost?

With a few rare exceptions when it is provided for free, using in-flight Wifi tends to be a lot more expensive than we are used to. When we’re on the ground, we have become accustomed to bars, restaurants, hostels and hotels all offering free Wi-Fi – except, paradoxically, in some of the most expensive hotels, where they often choose to charge guests extortionate rates.

In planes, however, these prices are more justified. As we mentioned, the satellite system is expensive to set up and maintain, and the antennae above and below the fuselage also increase wind resistance, adding to the cost of the fuel needed for the flight. All of this is passed onto the customer, meaning in-flight Wifi can be costly. North America currently has better infrastructure than elsewhere, making it the cheapest place to log on in the air, but Europe is catching up.

What can we expect in the future?

Developments are ongoing on both sides of the Atlantic. Gogo is in the process of launching their 2Ku service, which promises better reliability and a much faster connection. They claim they will eventually be able to offer speeds of up to 70Mbps under optimum conditions, much faster even than most ground-based system can currently achieve – although, for the moment, the speeds they can reach are much slower than this.

In Europe, Deutsche Telekom and Inmarsat are partnering with Nokia to develop something known as the European Aviation Network, a high-capacity in-flight Wifi system available to all members of the EU plus Switzerland and Norway. The system, which uses both ground-based towers and geosynchronous satellites is still in its infancy, but it has already been taken up by a number of European airlines (see below for the list).

In short, investment is pouring into the development of in-flight Wifi systems, and in the coming years, reliability and speed are set to catch up fast. In the very near future, the brief respite a plane journey used to offer from the always-connected digital world will quickly become a thing of the past.

Stay connected when you travel 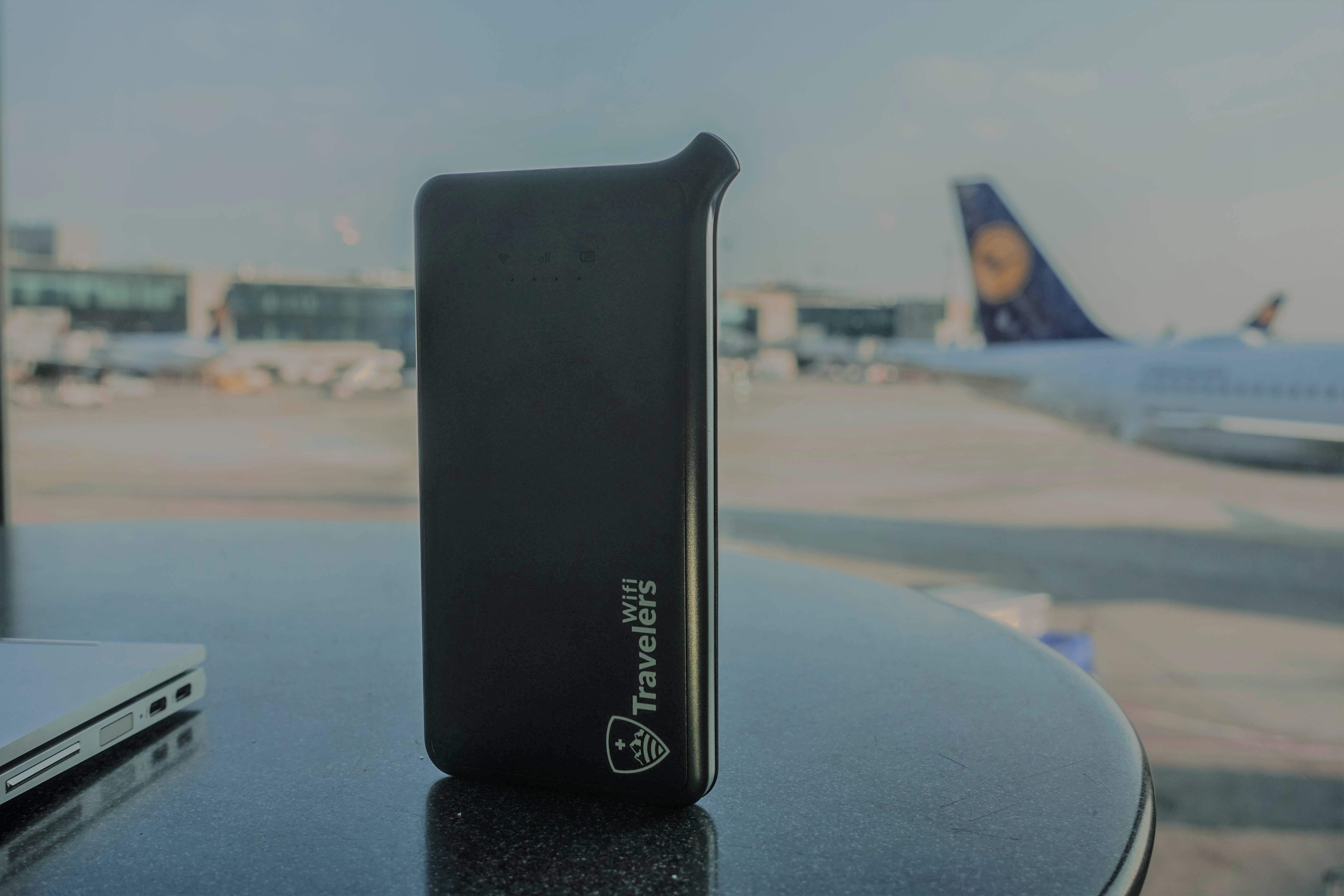 Whether or not you decide to take advantage of the opportunity a flight affords to switch off and disconnect, when you reach your destination, you will want to have a fast and reliable internet connection available at all times. Click here for our portable Wifi solution that gives you high-speed internet access on the go.

Here are some of the airlines which already offer customers the chance to connect to Wifi in the skies:

When you travel, it’s not always practical to take your luggage with you everywhere you go. If you check out of your hotel early or you are only visiting a city for a day, it’s…

Is it practical? What comes to mind when you think of London? Is it the soldiers with the red uniforms and the funny tall hats that guard the queen? Do you picture the city’s iconic…