We are very excited to announce our new partnership with RHB, the Rhaetian Railway! In a first step, our Travelers Wifi will be available for pickup and booking at 5 RhB stations, throughout Graubünden. From November 1st, 2018 you will be able to pick up our high-speed Wifi hotspots at the following RhB ticket offices of the RhB rail network: Davos, St. Moritz, Arosa, Scuol-Tarasp and Klosters. Please read on for further details about where to collect your Wifi hotspot – as well as a short introduction of each location.

What to do in Davos

Davos is best known for hosting the World Economic Forum, but outside of the time when global leaders and the world’s business elite descend on the town for their meetings, it is also known as one of Switzerland’s premier mountain resorts.

Davos boasts a range of plentiful accommodation, shopping, entertainment, and nightlife as well as fantastic opportunities for both summer and winter sporting activities.

During the warmer months of the year, the town is the gateway to around 700km of hiking trails that take visitors through some sublime, almost untouched alpine scenery. It is possible to head off onto the trails on foot or with a mountain bike – and for the more romantically-inclined, there is also the chance to take a trip in a horse-drawn carriage. At Davos Lake, there is also swimming and sailing, and for those who want to try something more adventurous, there is also the possibility to go hang-gliding and paragliding.

When the snow begins to fall, Davos is turned into a winter sports paradise, with 58 ski lifts and 300km of slopes that will keep skiers and snowboarders of all levels happy. There are also 75km of cross-country ski trails, two indoor ice rinks – and Europe’s largest natural ice rink – along with eight sledging runs.

In short, from families with small children to the most daredevil thrill-seekers, Davos has something for everyone.

Until 9th of May

From 10th of May until 14th of October 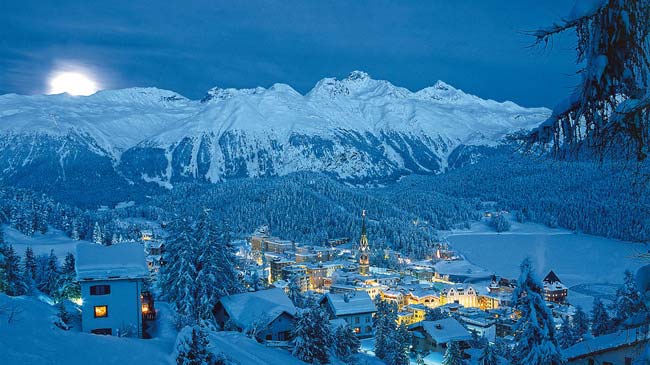 What to do in St. Moritz

The name of St. Moritz is inextricably associated with elegance, class and fine living. Thanks to a hotelier’s brave bet with his summertime English guests back in 1864, it has a good claim to being the birthplace of the concept of the winter Alpine break. Since then, it has come to be regarded as one of the world’s premier mountain holiday destinations.

Located at 1,800m in the Upper Engadine, it boasts several five-star hotels, including the opulent Badrutt’s Palace Hotel, perhaps the most famous in all the Alps. St. Moritz has a reputation for fine dining and is a well-known gathering place for the world’s upper class, as attested by annual events such as the White Turf Horse Race and the Snow Polo World Cup.

Before making a name for itself as a winter destination, St. Moritz was already known as a spa town due to the natural springs there, and summer visitors can look forward to exploring the many walking trails in the area as well as enjoying the 400km of mountain bike trails. There is windsurfing and kitesurfing on the lake and horse riding and rock climbing nearby; there is also golf for those who prefer activities of a more sedate nature.

However, it is in winter that St. Moritz really comes into its own. As the snows descend, the town and surrounding mountains are transformed into a winter wonderland, with 350km of pistes for skiers and snowboarders as well as 150km of trails for winter walking and 200km of cross-country ski trails. Finally, no visit would be complete without at least witnessing the action on the Cresta Run, one of the world’s only natural skeleton runs – even if you don’t take part yourself. 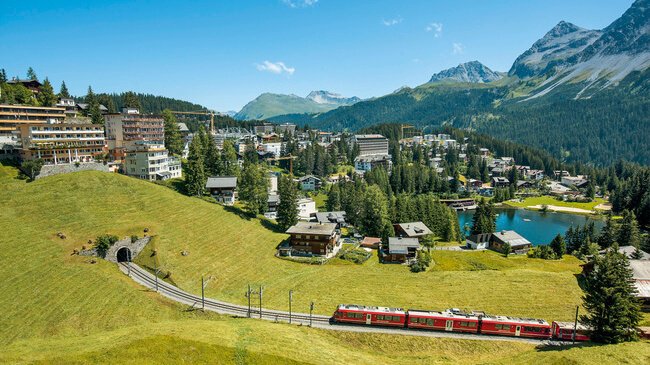 What to do in Arosa

The small town of Arosa has a much more laidback feel than St. Moritz or Davos and has long been valued for its clean air and beautiful scenery. It is an ideal destination for a peaceful getaway and is also a suitable choice for families.

During the summer months, visitors can explore the 200km of walking and hiking trails – including one tour that takes in no fewer than ten sparkling mountain lakes – and there is plenty on offer for mountain bike enthusiasts too.

Since 2013, Arosa has been connected to Lenzerheide by cable car, creating the largest interconnected ski area in the region. Skiers and snowboarders can enjoy the 60km of pistes as well as showing off their skills in the two snow parks. The surrounding area boasts 140km of winter hiking trails as well as many opportunities for snowshoe walking, cross-country skiing and Bavarian curling. 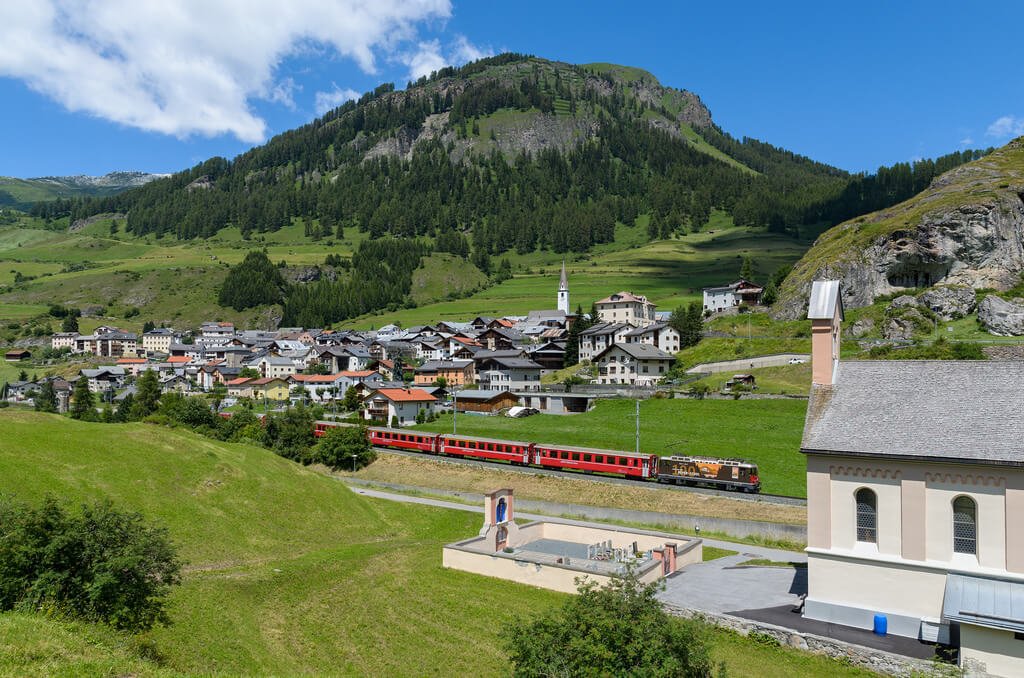 What to do in Scuol-Tarasp

Scuol-Tarasp train station lies at the end of the line in the municipality of Scuol, which now also incorporates the former municipality of Tarasp. The official language of the town is Romansh, and it is a place that proudly preserves its Romansh culture and customs. There are also several buildings of historical significance to visit, including the 11th-century Tarasp Castle.

In the summer, the town is known for its fine, sunny weather and its baths and health center. The surrounding area is stunning and well-suited to exploration on foot, while the more adventurous can take to the skies on a hang-glider.

In winter, the town is connected to the Motta Naluns ski area which includes pistes of varying difficulty as well as some challenging mogul runs. The highlight of skiing here is a 12km stretch that has acquired the nickname of the ‘dream piste’. 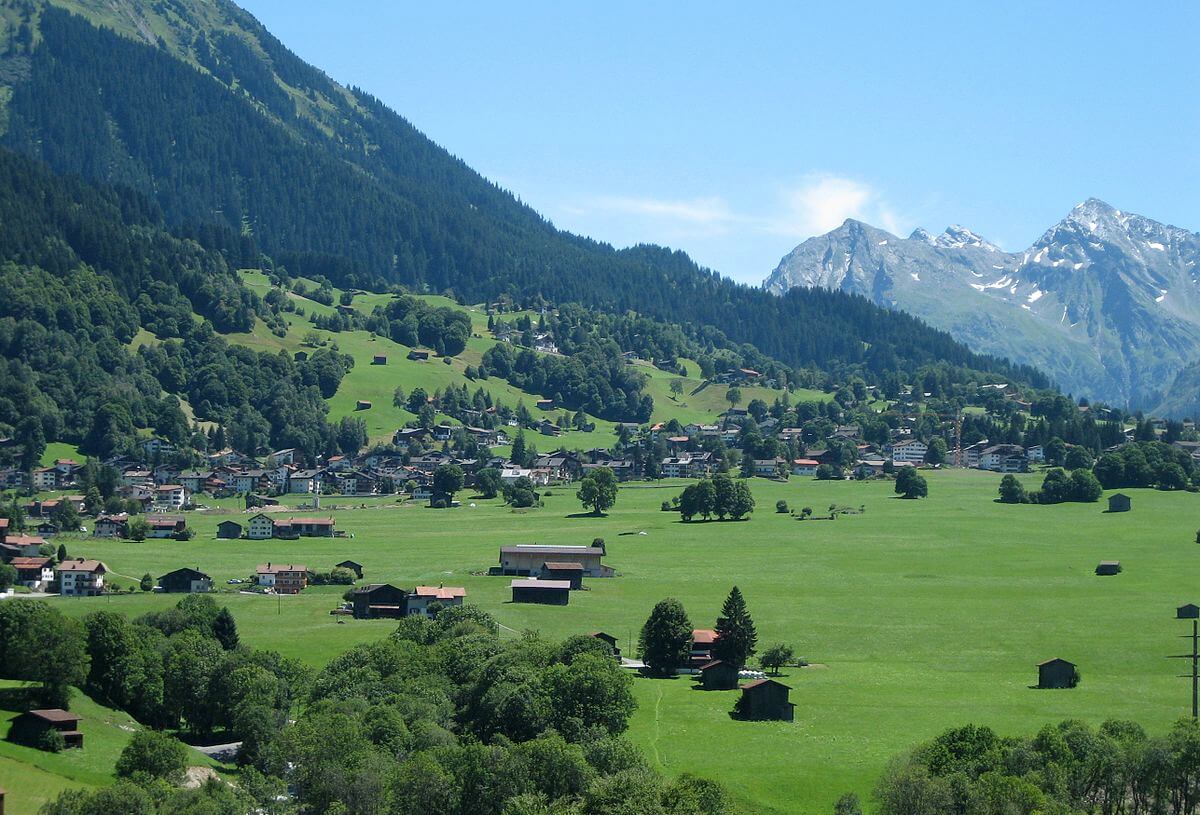 What to do in Klosters

A small and unspoiled village near the livelier resort of Davos that makes an ideal destination for a quiet break – with easy access to the larger town if things become a little too quiet.

During the summer, Klosters offers 700km of walking trails that it shares with Davos, with options that are suitable for all levels – from families with babies to those in search of a tough challenge. There are worthwhile and sometimes exhilarating rides for mountain bikers, and the Madrisa Kinderland Alpine Adventure Park that tells the stories of many of the local legends is perfect for those with young children.

Once the snow falls, the town is linked to the Davos skiing area as well as the Madrisa ski area, the latter of which is more suitable for beginners. Skiing in Klosters has another claim to fame in that it is a well-known favorite of Charles, Prince of Wales, the heir to the British throne.

For those not planning to hit the slopes, there is also plenty of scope for winter hiking, snowshoe walking, cross-country skiing, and tobogganing.

Enjoy the benefits of Travelerswifi – now more conveniently than ever before

Whether you are traveling on the RhB, in other areas of the country or outside of Switzerland, you will always want to easy access to a fast and reliable internet connection. Click here for details of our portable unlimited Wifi solution – now available from more locations than ever before.

We are happy to announce that we added a new location to Travelers Wifi partner network. From now you can get the device in the Château-d’Oex Tourism in Pays-d’Enhaut Région. Château-d’Oex is the main town…

The Deep Knowledge Group recently published an in-depth 250-page report ranking 200 countries and regions around the world on how safe they are in terms of travel during the covid-19 outbreak. Although the resumption of…

When you travel, whether it’s for business or pleasure, carrying around heavy or bulky luggage can be a pain. However, if you travel by rail in Switzerland, SBB, the country’s national railway company, can take…