The Safest Places in the World to Travel during Covid-19


The Deep Knowledge Group recently published an in-depth 250-page report ranking 200 countries and regions around the world on how safe they are in terms of travel during the covid-19 outbreak.

Although the resumption of unrestricted international travel during Covid-19 as we knew it just a few months ago is probably still some way off, for those who are getting itchy feet after being stuck at home for so long, the results make for interesting reading.

To help you digest the report, here, I look at some of the more interesting points it has raised. 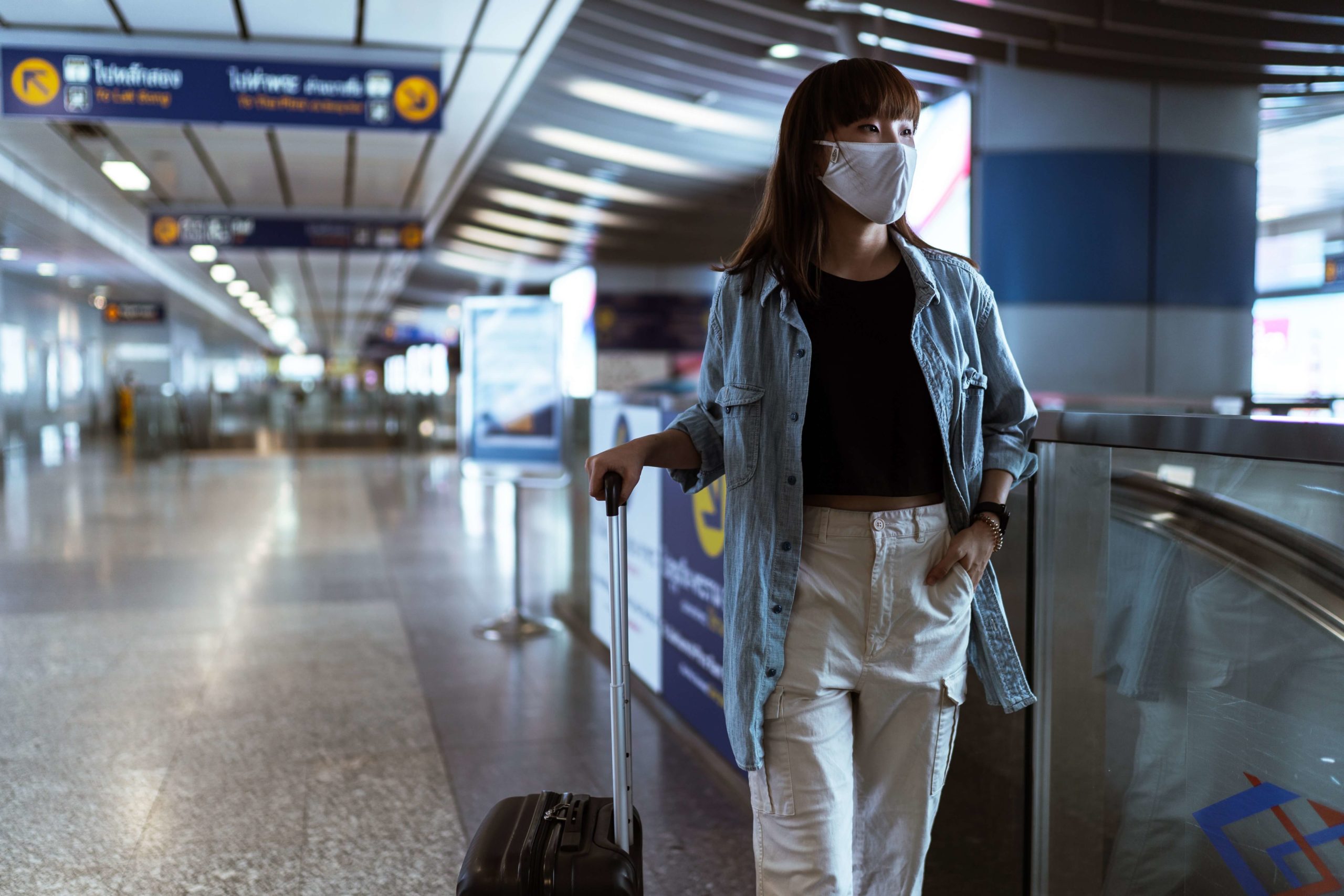 What is the report and how was it compiled?

The Deep Knowledge Group has been working with data concerning the outbreak of the novel coronavirus for around three months, and the group has now published the results.

So in other words, the report doesn’t simply look at how likely you are to catch the disease if you are in a country but rather the country’s overall ability to react to the outbreak and to bounce back from the fallout economically and socially once the virus has been contained.

What are the main takeaways?

So for example, through effective management of the crisis, countries like China and Vietnam have placed much higher on the list than developed Western countries, for example the UK and USA, where it can be argued that governments have dropped the ball.

Which countries have done well? 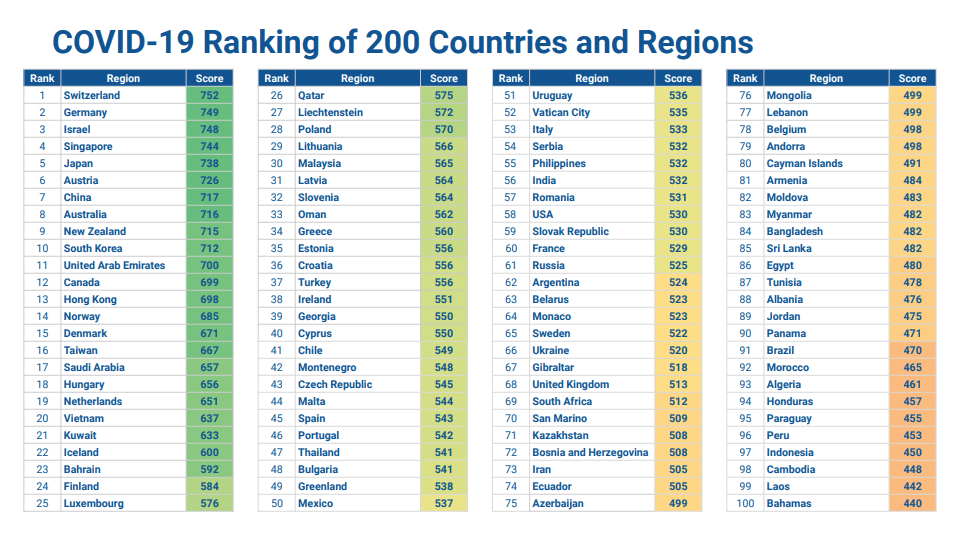 The country to travel to during Covid-19 which has the best score, according to the Deep Knowledge Group, was Switzerland, closely followed by Germany. They are joined by Israel, Singapore and Japan to complete the top five. Notably, Japan was one of the earliest countries to record cases of covid-19 outside of China but still ranks highly on the list.

Other notable entries in the top twenty include Hong Kong (13th), Taiwan (16th) and Vietnam (20th).

Hong Kong, of course, previously experienced a coronavirus outbreak when it was one of the epicenters of the 2003 SARS crisis. As a result, this time, it took quick and decisive action to prevent the spread of the new coronavirus when it appeared in early 2020.

Vietnam also took swift action at the start of the outbreak, closing its borders and effectively containing transmission.

Here are the top ten countries according to the report:

Which countries have apparently underperformed?

Among the countries that will be disappointed with their performance according to these rankings are USA (58th), France (60th) and the UK (68th). These are all countries that are usually considered to be among the most developed in the world but all of which have scored badly according to this report.

Sweden, one of the only countries to resist enforcing a strict lockdown, is ranked 65th on the list. Brazil, now considered the epicenter of the outbreak in South America, is ranked 91st.

Which countries are at the bottom of the table?

The countries at the wrong end of the table are dominated by those from Sub-Saharan Africa. The most dangerous country to travel to during Covid-19 in terms of the disease is currently considered to be South Sudan, followed by Rwanda, Mali and Chad. The bottom five is then completed by Afghanistan.

Here is the bottom ten in full: 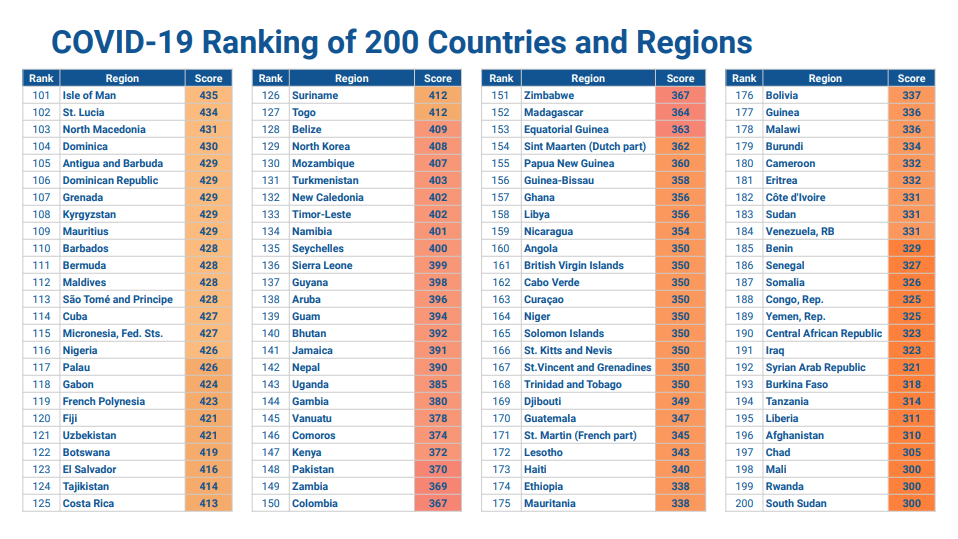 The report has also placed countries into four tiers, depending on their performance.

The top tier, consisting of the 20 best-performing countries, is made up of places where regional safety is rated as being “exceptionally high”.

The second tier, countries that have responded “comparatively well” to the crisis, is made up of the next 20 entries on the list.

The next 60 countries, in other words, the countries placed from 41 to 100, are placed in tier three. These countries are considered to have performed “much less favorably”.

However, it should also be noted that data collection and evaluation is an ongoing process, and as more data is analyzed, countries’ scores and relative positions – as well as which tier the Deep Knowledge Group places them in – is apt to change.

This is a long report that goes into lots of detail, but the bottom line is that if you are looking for somewhere safe to travel during Covid-19 once the restrictions start being lifted, your best picks are the countries that have been placed in tier one.

Other countries are currently lagging behind, and you might prefer to consider waiting before booking trips to those places, especially the countries that currently find themselves in tier three and below.

However, as has been the case since the start of this unprecedented global pandemic, the situation remains fluid, and the best advice is to make sure you always keep up with the latest developments before planning any non-essential travel. 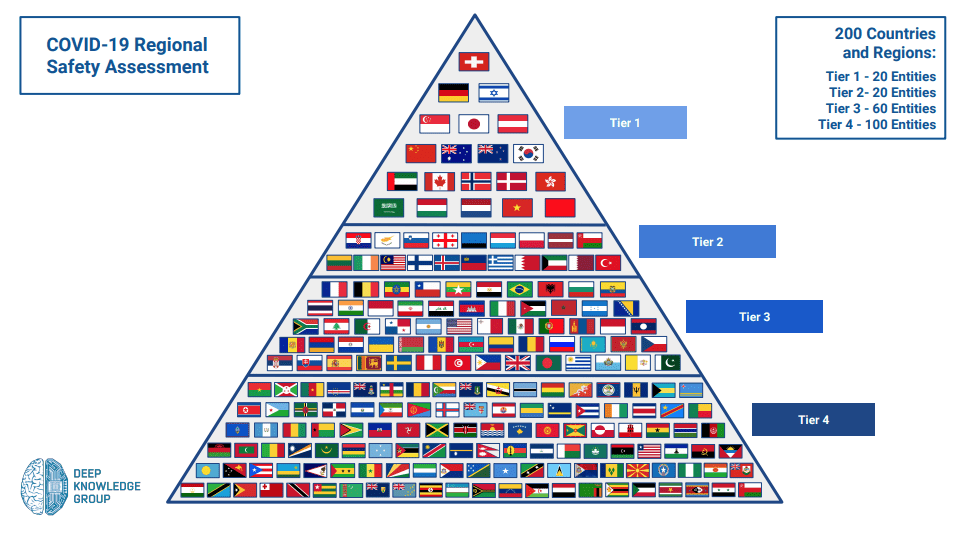 Stay connected while you’re away

At this time more than ever, when you travel during Covid-19, it is essential to remain connected while you are away. If you need to travel during Covid-19 and want to have guaranteed access to the internet at all times, click here to check out our convenient pocket Wi-Fi solution that will provide a fast and secure internet connection, wherever you go.

We are happy to announce that we added a new location to Travelers Wifi partner network. From now you can get the device in the Château-d’Oex Tourism in Pays-d’Enhaut Région. Château-d’Oex is the main town…

The Caribbean islands are one of the most delightful and popular destinations to visit. When traveling to Caribbean, travelers usually visit one island country while travelers who are visiting the Caribbean via cruise will often visit…